Remember to pay your fare before riding

If you don’t pay your fare, Metro Transit Police could fine you. 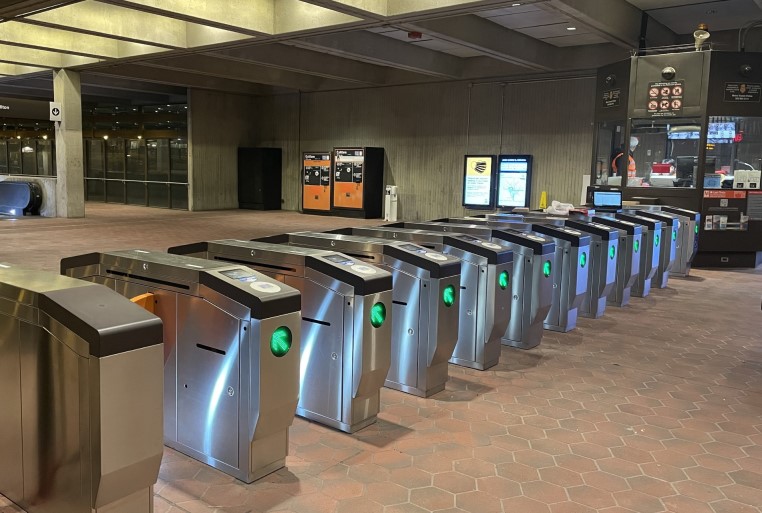 Effective November 1, 2022, Metro will begin enforcing penalties for those riders who do not pay their fare on trains and buses. Fare evasion can be a crime in Maryland and Virginia and is a civil offense in Washington, DC.

If you need more information on obtaining a SmarTrip® card to pay for your fare or qualifying for programs that offer reduced fares, please visit https://www.wmata.com/fares/index.cfm.

Fare policy is a major issue as ridership and revenue have yet to recover from the pandemic. When someone avoids paying their fare, it hurts everyone.  Metro counts on that revenue to keep buses, trains, and MetroAccess services running.

What is Metro doing to address fare evasion?

In October, Metro launched a systemwide warning campaign focusing on fare evasion and fines associated with failure to pay fares on Metrobus and Metrorail. Fare evaders could see potential fines (ranging from $50-100) in accordance with citations issued in DC, MD, or VA. Back To Top

When will the fare evasion warning campaign start?

The warning campaign began in October, and systemwide enforcement will begin in November. For the first two weeks of the campaign, digital signage will display information about the fines associated with failure to pay fares on Metrorail and Metrobus. After the first two weeks, digital signage will remain in place, and MTPD officers and other Metro personnel will hand out physical warnings. The campaign is designed to raise awareness of fines currently associated with Maryland and Virginia and inform fare evaders of the new civil penalties in the District that will take effect in November. Back To Top

Who is the focus of the campaign?

The October warning campaign is designed to (1) inform Metro customers that fare payment is required and expected to use Metrorail and Metrobus, (2) make the community aware of the varying fines and penalties associated with citations in each jurisdiction, and (3) prepare the community for citations that will be issued by Metro Transit Police (MTPD) after the warning campaign concludes. An adult who doesn’t pay fares will be the focus of the campaign. Back To Top

Why is it important for everyone to pay Metro fares?

Fare revenues contributed $213.5 million in FY22 to fund Metro operations. Metro conservatively estimates more than $40 million in revenue was lost in FY22 due to fare evasion on Metrorail and Metrobus, or about 22% of the projected deficit for the next Fiscal Year. The loss of funds directly impacts revenue, service offering and delivery, system maintenance, and operational decisions. Back To Top

Nonpayment of fares hurts everyone and unfairly punishes those customers who follow the rules. This campaign will educate and warn fare evaders systemwide that there are consequences associated with nonpayment on Metrorail and Metrobus and identify the penalties associated with citations in each jurisdiction. Back To Top

When will citations be issued?

MTPD already issues citations in Maryland and Virginia. MTPD will issue fines systemwide to include the District in November. Back To Top

Why is the District now included in fare enforcement?

The District’s history with fare enforcement policy has been complex. Prior to this year, there was no mechanism for MTPD to issue citations in the District. Understanding the importance of fare recovery for Metro, WMATA Board Members and District leaders have worked together on a solution that makes enforcement consistent across the region.

Who will issue citations in November once the warning period concludes?

MTPD will solely be responsible for issuing citations when people choose not to pay fares. Back To Top

No. Station Managers and Bus Operators (Drivers) have important responsibilities, including providing customer support for those who may have difficulty accessing the system because of SmarTrip® card/ mobile payment issues or unfamiliarity with our system. For their safety, they are not asked to confront customers about nonpayment related to fares. Back To Top

What if I cannot afford Metro fares?