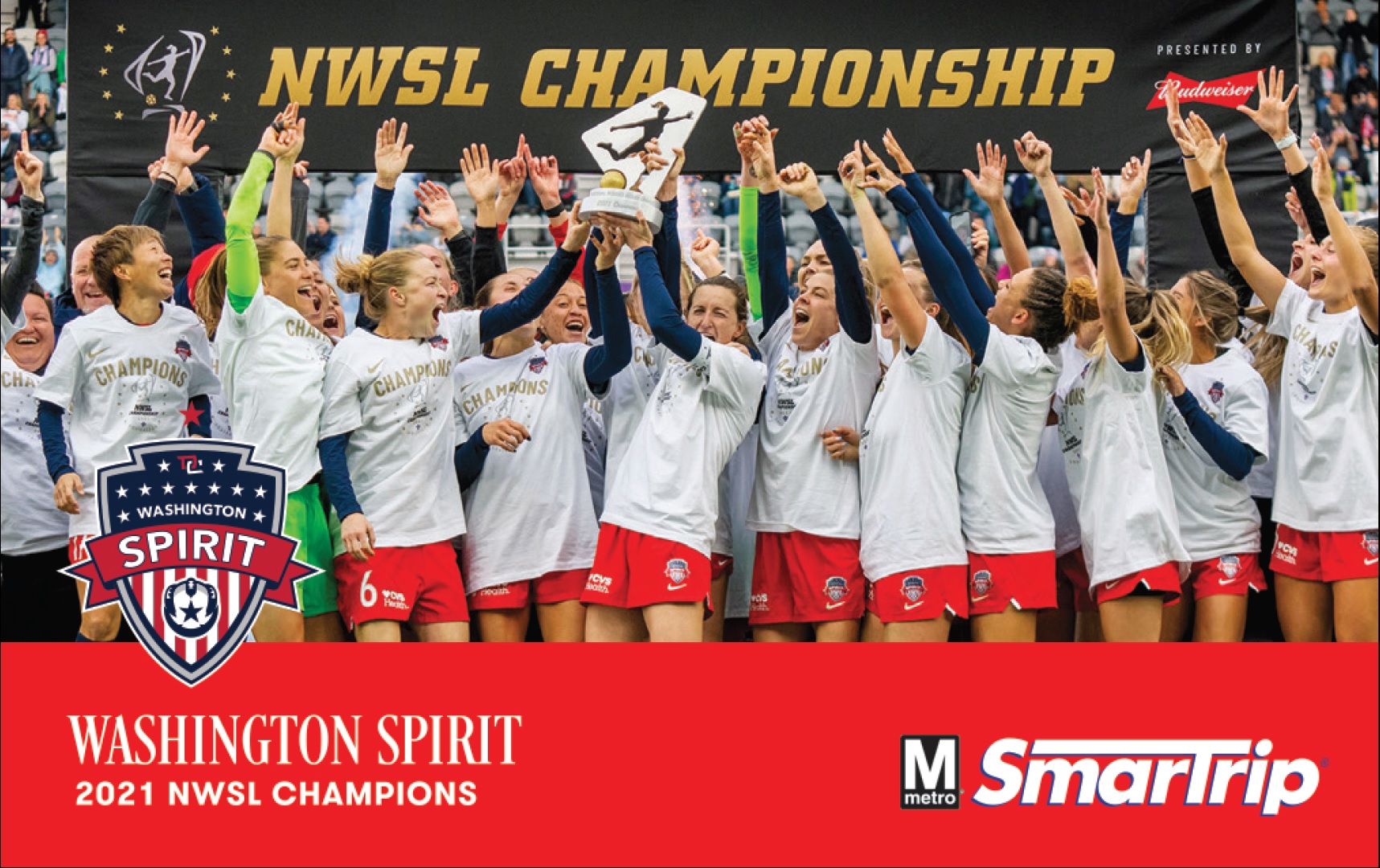 Washington Spirit fans can now travel to games with a new commemorative Metro SmarTrip® card celebrating their National Women’s Soccer League Championship. The card is available in selected stations and features an image of the team hoisting the championship trophy after the title-winning game.

The limited-edition cards are being sold at Navy Yard, Waterfront and Gallery Place stations in specially marked fare machines. Look for the sign on top. The NWSL championship cards arrive just in time for soccer fans headed to Saturday’s game at Audi Field against the NJ/NY Gotham FC.

“We are excited to honor the Spirit, reigning NWSL champs, with this commemorative card. The Spirit’s title run continues the winning tradition in the District of Champions,” said Metro General Manager/CEO Randy Clarke. “Metro is proud to support the team and fans getting to and from games.”

Metro has produced 10,000 commemorative cards, available at the designated stations only on a first-come-first serve basis. Each card costs $2, in addition to the fare value.

"We are honored to partner with Metro in recognition of the Spirit's first championship title," said Jonna Valente, Spirit VP of Communications. "These commemorative cards celebrate that incredible win for players and fans alike."

Spirit fans can join starting midfielder Anna Heilferty and Metro GM Clarke on Tuesday, Sept. 13, to get your Championship cards. They’ll be at the Gallery Place Station (7th & F sts entrance) on Tuesday, Sept. 13 at 4 p.m. for a special meet and greet.

Heilferty is a native of the DC region and the first-ever Ambassador for Sustainable DC. The initiative’s focus on environmentalism and sustainability goes hand-in-hand with Metro’s commitment to providing sustainable transportation.

The Spirit worked with Metro to design the card for the start of the NWSL season; however, the SmarTrip cards were delayed due to supply chain issues related to the pandemic.

Earlier this year, Metro also released a limited-edition SmarTrip card to commemorate the Mystics’ 2019 Women’s National Basketball Association Title. The championship cards were released to kick off the Mystics’ WNBA season after the pandemic-limited games and attendance during the 2020 and 2021 seasons.