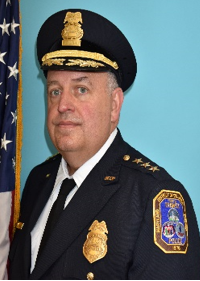 Chief Michael Anzallo was appointed to lead MTPD on February 2, 2022, and had served as the interim chief of police since August 2021. He has helped steer the department through pandemic-related challenges with an emphasis on community policing throughout the region.

In his role overseeing the department, Anzallo has focused his attention on recruiting a new generation of police officers by updating outdated policies that can preclude men and women from joining MTPD ranks; bolstering support of accountability measures within MTPD that hold officers to the highest standards of policing; building positive relationships with communities in Metro’s service areas to foster collaboration and understanding of neighborhood needs while helping to reduce crimes against people near and on Metro properties; supporting stiffer penalties for proposed legislation to protect frontline transit workers from assaults; expanding police presence to support new service expansion areas in Metro’s territory; and continuing to emphasize opportunities for dedicated training that supports the future of a growing region.

Prior to joining MTPD as assistant police chief in 2018, Anzallo worked as a Metropolitan police officer, rising through the ranks, and bringing more than 30 years of policing experience in the region to the role.

The Mission of the Metro Transit Police Department is to protect Metro patrons, personnel, transit facilities, and revenue by providing law enforcement and public safety services.

The Metro Transit Police will protect and serve our customers and employees with dignity and respect, through innovative ideas, new technologies, teamwork, integrity, a commitment to our mission, and the oath of office.