Metro has a message for fare evaders: operating buses and trains isn’t free. Customers riding Metrobus and Metrorail are required to pay fares and will be warned accordingly. Starting Oct.4 your Metro will begin a warning campaign to alert people who neglect to pay fares that there are fines associated with fare evasion in each jurisdiction.

The warning campaign will begin with notices displayed on digital signs throughout the system. After the digital signs run for two weeks, Metro Transit Police (MTPD) officers and other Metro personnel will start distributing physical fliers to fare evaders with the same warning information.

"As I mentioned previously, the region needs to decide what we want Metro to be, and fare policy should be part of the conversation," said General Manager and Chief Executive Officer Randy Clarke. "Many people have mentioned going to a fare-free model, but fare-free does not mean free. There are costs associated with running the community’s transit system and therefore the necessary revenues must exist to deliver the services the community needs.”

Below is the warning that will appear on digital signage and on fliers: 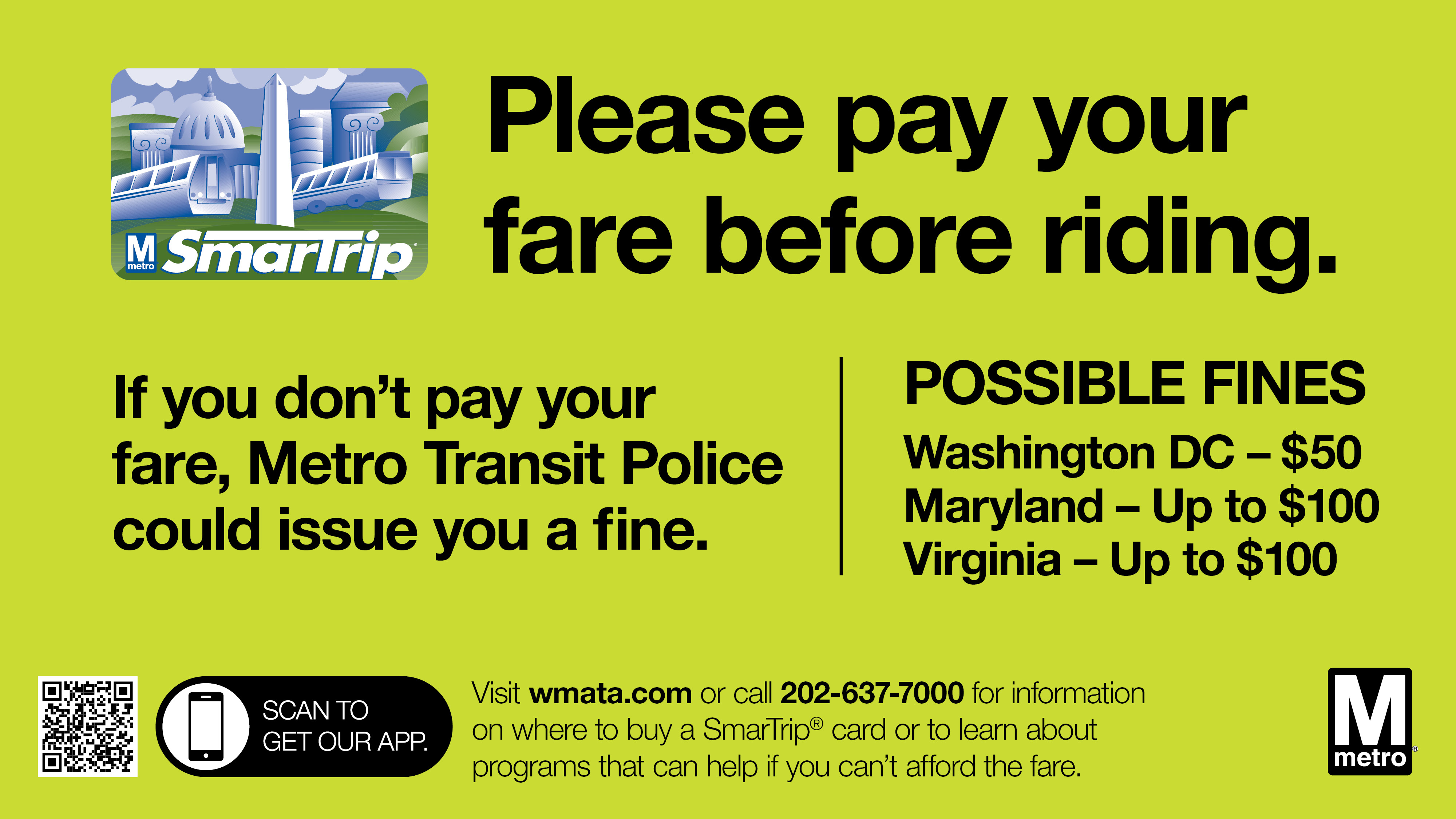 The warning period will conclude in November, and MTPD officers will issue citations to anyone caught not tapping SmarTrip® cards or mobile phones at fare gates, exiting emergency gates in stations and not tapping fare boxes on Metrobuses.

Fare recovery is a major issue and has been mentioned as one of the top concerns of customers when talking with Metro staff and Metro Board Members. Revenue from fares allows Metro to keep buses, trains and MetroAccess services running.

The campaign is designed to raise awareness of fines currently associated with Maryland and Virginia and inform fare evaders of the new civil penalties in the District that will take effect in November.

In Maryland and Virginia, fare evasion is a criminal offense, while the District has now put in place newly established procedures necessary for MTPD to proceed with enforcing civil citations systemwide.

Fare evasion is responsible for significant revenue losses and is part of the focus to close a shortfall of nearly $185 million in the upcoming budget. Using data from Metrobus and pre-pandemic industry averages for Metrorail, Metro conservatively estimates revenue losses due to fare evasion totaling $40 million in fiscal year 2022 or 22 percent of the total upcoming budget gap. New faregate technology, currently being installed, will allow Metro to more accurately measure the scale of the problem.

Metro relies on fare revenue to maintain rail and bus service which is critical with a budget gap expected to grow to more than half a billion dollars by fiscal 2025. While some school systems in the region provide transit benefits, students are still required to tap their card to travel and be counted for Metro to receive the revenue. Children aged four years and younger are free. Those adults who don’t pay are subject to the fines and other penalties associated with failure to pay.

As part of the campaign, we are working with our local partners to offer resources to make public transit more equitable and affordable for those in need. A low-income fare pilot is getting underway in the District, in addition to a proposal to provide $100 in SmarTrip credit for qualified residents to ride buses and trains.

Metro is also exploring other methods that will prevent customers from entering rail stations without paying. In November, Metro is expected to begin testing faregate modifications as a preventative measure. Prototypes are in development and will be installed at a selected rail station for employees to test. Some of the modifications being explored include tactile deterrents on top of faregates and higher barriers. Once the initial round of employee testing is completed, customers will be able to try the modified faregate and provide feedback early next year.

For more information on the warning campaign, please visit wmata.com/paythefare.